It has literally been 2 1/2 months since I have watched anything. There are pages of notes on movies that haven’t yet made it to this blog for an official review. But breaking my streak with Gravity(the movie) the other night and now with God’s Not Dead; totally worth it!

I am usually harder on Christian movies then just any movie. Most of the time Christian movies are not very good for various reasons. One main reason for it is the overt communication of Godliness in a movie. I think sometimes Christian people who use film as the medium of communicating the Gospel, use it as an extended altar call. If the film talks about God then God has clearly been represented. This sounds like a good idea but it is not.

The art of film has to do more with the rules of art, rather then the message. It is pretty clear in most films what is going on and why it is happening. Murder, immorality, sexual abuse, sexual sin and violence, but also family matters and love; all get portrayed clearly as the theme and the message. But the subtle or the subtext of the story, however, that is what is real and what is taking place in the audience. This is why you walk out thinking of multiple subliminal story lines clicking in your head. This creates an appreciation for a story that makes you think.

Overview: God’s Not Dead follows a freshmen college student Josh Wheaton(Shane Harper) as he enrolls in Professor Radisson’s(Kevin Sorbo), highly charged philosophy class. Shall I say with humility that the premise of this film is very contrived and not very original. But with that in mind I did like this movie. Josh decides to risk failing his class and any attempts to go to law school with three sessions to convince his classmates that God is not dead. As the teacher had all of the students write it on a piece of paper and sign it. Asking all to appease the atheist in the professor. The subplot consists of that overly cliched theme that everyone is connected. Now, it still turned out okay and this film takes the cliche and works with it. Dissatisfied answers in characters that are kind of searching for God. In the end, well, am I really breaking down this film? No, I am not. I am actually responding to my own testimony. God is alive. Jesus, really guys, is alive! 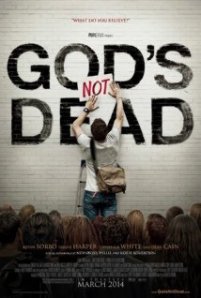 Can God use cliche plots and subplots? Can God use bad acting or even okay acting? Can God use a film like Noah(which is next for me to see) and do it through an unsaved guy that probably doesn’t love God or desire to please Him, yet he is using the bible as a source for a story. Do we limit God by listing all the unbiblical points in the film? My point is that I am seeing that the world is a little hungry for something new and praise God that its getting out there. The new and improved Left Behind opens up in October and so does Christian Bale as Moses in the Exodus.

God is clearly alive. Professor Radisson dies and says his prayer of accepting Jesus before He dies. Dean Cain is no superman as a boyfriend and he really doesn’t get it in the end. The lady with Cancer( June..I think) she accepts her fate but also turns in the end. Josh loses his girlfriend but gains faith and boldness in the face of disbelief. And the key of all keys in this film is this line: Prof. says: I hate God and Josh says,”How can you hate what doesn’t exist!” And that is pretty much it. I am writing in a different tone today because I don’t think this movie needs a review. I need a review. I need to question my limitations that I put on God. I disbelieve that God can use art. Well, it would make sense because He created art. He is the storyteller of the ages. All our pious attempts to box God in all stem from ignorance. We really limit God and think He can’t use anything to speak. I think I have to get over myself because I am not really that cool, or really that smart. I go about my life repeating what I have always heard but what the world needs in movies and in life is a people that have tasted and have seen. A people that have encountered the living God. God seems dead to Christians and Christians think they are halfway alive to God.

My point is not to dis anyone. I am correcting myself. I went into this movie with low expectations and it reveals to me that I have low views of God. I have a low picture of Him. Is He alive to me, today, in me..today! So with my poor grammar skills and my ranting in this post please hear that God will not be limited. He will use every cheesy film that we think impacts no one. So, praise God that this movie has done better then the one’s that have gone before it. Let us remember that perishing comes from a lack of vision and I need to see. I need to see again. O, look how much I have to say because I read my bible everyday and I have been going hard for 10 years now. That means nothing most days. What matters to the world around me is how big love is inside of me and is what I am writing and speaking changing lives and leading people to Jesus. God is not dead but He gets portrayed as dead because we have a low view of Him. I am repenting on behalf of bored Christians. Lets get rid of boredom and start feasting on the knowledge of Him.

A good quote:
“Only a real risk tests the reality of a belief.”

“I well understand the power of moving pictures to shape opinion AND human perception, yet this film is so poorly contrived and so heavy handed in its “earnestness” as to be likely to join those movies about the “killer weed” as merely a cult attraction, periodically revisited purely for its reflection of shallow social propaganda and cultural hypocrisy.”–Taken from: http://lafiga.firedoglake.com/2013/12/22/gods-not-dead-duck-dynasty-kevin-sorbo-dean-cain/