Spirit of Python(Jentezen Franklin) was the last book review that I did. You can read it here.

Books, books and more books was a post I did just this past fall but since we already almost done with April I will recap a little bit.

Last May(2013) I stepped into a massive book reading streak that has slowed down a bit but nonetheless is still taking place. I don’t think every book that I have ever read deserves to be reviewed but I like to challenge my audience(mostly new folks in the last year) to look at cliches in books, stuff everyone should read and books that maybe you have never heard of, or care to know what is in them.

Anything in a book that challenges our core assumptions about God, Jesus and the church will most likely be listed on this blog. The last book streak I had was fall 2011. At that time I read: some of the book Manic, some of the book Millenial Maze by Stanley Grenz, The Lonely American, Strapped(why 20 somethings can’t get ahead), Helping Your Troubled Teen, Men to Boys by Gary Cross, American Therapy, Making Ideas Happen, Erasing Hell( a response to Love Wins), Some of Tim Tebow’s memoir Through My Eyes, Sex, Dating, and Relationships, Pretty In Pink ( a book about the 80’s teen films) and before the streak started in 2013 I was reading Notes From The Tilt A Whirl by N.D. Wilson.

At that moment in 2011 I was buying books like madness. I had also started various book about Teenagers in America. The book Teenagers: An American History by Grace Palladino and The Rise and Fall Of The American Teenager by Thomas Hine. And the documentary American Teenager by Nanette Burstein. The documentary focused heavily on your typical kids in Indiana. Here is a good review. 4 teens, 4 cliches. The jock basketball player, the infamous popular girl with the mean girl side effect, the outcast artistic girl and the popular guy that all the girls want to date, who also is a basketball player. Overall, pretty okay but not groundbreaking.

I also delved into the beginning of trying to watch every film ever made on teens. Now, after doing so a bit in years and months past there is a lot of gross, disgusting portrayals of rebellious youth. That is something that most of us do not actually need to see. In the future, I will probably post something on teen films but in a very selective way. I had begun it a few years ago and well have to see what will happen with that in the future.

I had just finished my third summer working with Teenagers and I was really committed to( and still could happen someday) making a documentary centered around the American teens in the world and in the church. The infamous over-quoted stat that 80 percent of young people leave the church by the time they are 18 years old, has always captured me. This idea has not died but I have shifted my focus in terms of what I am reading now but its always good to process it on this blog. If you have been following this blog since then you will remember some poems having to do with the mook and the middriff. I think I remember also tying it into some real people I worked with at Trader Joes(in 2009) that had struggled with being mistreated. The mook language was straight from a documentary on teens and media on netflix. The focus of the film was centered around what marketers call “coolhunting.” The teen subject still captures me and might resurrect itself in the future.

The other topic that began to interest me years back was mental health and American culture. 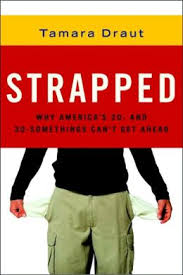 The book Strapped: Why 20 and 30 somethings can get ahead. This book is great insight into the whole topic surrounding the expenses it takes to go to college. The dilemma that young adults all face is the growing pressures to get a 4 year(or even more) degree to really make it in the workplace. However, getting the degree has become more difficult then ever before. I was reading in my sociology textbook that in 2011, $27,200 is the average amount of school debt college students carry with them.(Sociology, Richard T.Schaefer, 10th edition) Strapped, really breaks it down. I am grateful for the stafford loans, money for  past soldiers, and the Pell grants that help people go to community college, but keep in mind that not everyone gets the FAFSA approved in order to receive financial aid for school, and the price of even public, or state schools, still is very high in comparison to where it used to be.

The book review on American Therapy has begun the first discussion on therapy in our modern day culture. Read review here.

Beginning with the psychoanalytic theory that Sigmund Freud developed in the early 1900’s.

My own battles with depression have led me to want to know everything I possibly can about this large and vast subject. I will share in more detail all of my testimony and the many, many, stories I have from the past seven years of battling with it. It is a more focused goal now to become well read in this subject. But I did start to go there a little and now, today, I am going at it again. 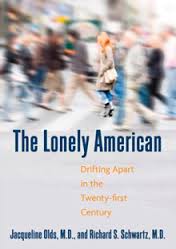 The book The Lonely American really revealed how with technology and the many industrialized parts of our society, people are drifting further apart. People are finding it harder to make deep and meaningful connections.

One very eye-opening part of the book talked about how when men cheat on their wives with prostitutes it is not usually because of a lack of a sex life with their wife, but rather because of deep loneliness. They are seeking out someone to connect with. That doesn’t mean the former takes place( in regards to a lack of sex life) but it goes to show that what we all crave as humans is connection to people in this world.

It is interesting to note that because of social networking we seem to “feel” like we are getting closer to people by posting status updates on how we “feel in the moment” and what is happening to us in life. We can fall into that sensation that just because everyone will see it then everyone will understand me, the person posting the update. But the opposite has actually taken place. Forbes and The New Yorker has both posted articles relating to this very subject.

I remember reading this one from the Atlantic, written in 2012. This stood out to me. Stephen Marche says,

We are living in an isolation that would have been unimaginable to our ancestors, and yet we have never been more accessible…We live in an accelerating contradiction: the more connected we become, the lonelier we are. We were promised a global village; instead we inhabit the drab cul-de-sacs and endless freeways of a vast suburb of information.

I wrote a review back then, as well, on Men To Boys by Gary Cross. Read the review here.

That book really revealed to me that there is an epidemic in masculinity that has covered itself up with ‘extended adolescence.’ Listening to Corey Russell preach at OneThing(yearly conference in Kansas City) he said it this way: “We are living in the stupid room!” Basically, it comes down to men needing to grow up and be men. The very opposite sometimes take place, even in the church. The culture flow says to not grow up and to just live in your parent’s basement til you are thirty. Its no wonder you hear women say and ask; ‘Where are all the men?’ The book Fatherless America, written a while ago, answers this question with the statistics on how Fathers play a huge role in keeping the family a family.

It is not that women aren’t immature either, because that can exist with them too. Its a human problem to not want to take responsibility in life. The culture says that by doing your own thing you can grow up whenever you want to. This creates this present crisis. If God has entrusted men to grow up and lead women, and lead their families; then, the only way for it to change is for men to not revert back to childhood and stay in video game mode til 35, but to actually do something in God that creates  maturity. The best way to “get a girlfriend” as some would say, is not found  outside of a wholehearted 100 percent, violent, pursuit of Jesus Christ.

Jesus is the example of manhood. He is where we derive masculinity. He is not nice as some would say nice guys finish last, nor was Jesus a bad boy, but He knew who He was and He embraced the difficulty that was set before Him. I believe that studying Christ in this way will liberate men to come out of that fearful shell.

Getting away from immaturity comes when LOVE is in the center of your life. I mean God’s love. First John stating: God is love. I mean, getting God’s love in you and you knowing who you are in God, by a revelation of God. A man should be daily asking for ‘a spirit of wisdom and revelation’ as stated in Ephesians 1:17-19. Just by reading Men to Boys, it has created a three year discussion on this very subject. So, more on this to come in the future.

Mental Health, Teenagers, and various parts of our culture have all been apart of the books that I have read. For the sake of space, this recap is part one of the larger subjects. It will take a lot more space to recap the last year of books. It has been so many. But please add comments to this post. Man and men, manhood and masculinity, teenagers in America, and anything to do with mental illness, or mental health(i.e. depression, anxiety, bipolar and any other illness that has been diagnosed by doctors in the past 100 years).

Book recommendations are also welcome too. I am always looking for good reads. The next post on this subject will refer to the more recent books I have read in the past year.

A long recap but I feel I need to write this before getting into where I want to go with book reviews in the future on this blog. Thanks for reading the Ruckus Journal.