If you paid attention to my blogging last spring 2013 I only did Christian movie reviews. It was a lull in the blogging time for me and mostly poetry was what was keeping things going for me. I don’t think apologies work anymore for blogs. Writers of blogs always telling us what they wish they were writing or not writing. This is long overdue, but I am doing in anyway because I do have more afterthoughts of what this film means to the world, then perhaps any other movie that was seen on my spring vacation. 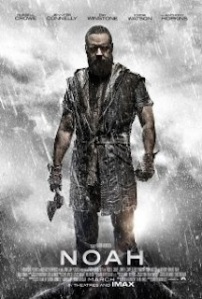 Plot: Noah is the story in the book of Genesis showing the dark condition of humanity and God’s desire to destroy humankind because of the darkness that is in man’s heart. ‘Violence continually’ is how the bible describes it. Noah is seen by God as a righteous and blameless man that walks with God. Noah, his wife, and Noah’s sons; Shem, Ham and Japheth. God gives Noah 120 years to build an ark and the forewarning that He will flood the earth. It had never rained before in that time. In the end, only Noah’s family survives the flood as well as two of every kind of animal. God’s promise in the end of the story is shown by a rainbow showcasing God’s mercy and His intent to never again destroy humanity with a flood.

What’s more important than anything..in a film like this..

It is no surprise for any movie lover that more and more faith based films are starting to become mainstream. God’s Not Dead and Noah both released march 2014, as well as Left Behind(a remake starring Nic Cage) that got bumped to October instead. The Jesus film Son of God was also released and coming in the fall is the epic and much anticipated Exodus film by Ridley Scott and starring Batman himself as Bruce Wayne(Christian Bale).

Hollywood and all its influence always gives a skewed view of the faith. But at the same time they also can actually do a better job at it then most Christian films. Here’s why.
Usually they have money and more money to supply a better script and better actors and better visual effects. They also usually have a very non-traditional way of looking at things. Usually pulling writers who have mastered how to write a script more then masters of theology.

Noah had a lot of things that were not in the original story. And most of the critics had a massive problem with this. A lot of emotion and energy was released towards this movie from Christian people. Most of the concern was with the “accuracy” factor. Critics have listed off more the wrongs and the errors more then the bigger picture.

God does not care about accuracy. I don’t think He cares as much about it then we would say He does. Are people coming to Christ because a pastor in a pulpit preaches the bible with 100 percent accuracy? Do people respond to what we would call “the whole truth?” I don’t think so. I think most of us believers are off a lot. And some people put their offsetting into books and claim that their view is the right one. More knowledge doesn’t always equal more humility.

Noah shatters this idea of perfect. And, yes, the inaccuracies so to say are not pleasant. The opening scene retelling the story of Genesis one starts with..’In the beginning was NOTHING!’ Caps lock just to make the point. That is not okay. The wicked guy that sneaks onto the Ark and gets killed by one of Noah’s sons’ all in a “you have reached your manhood” kind of way just adds to the chaos that got them on the ark in the first place.

The errors that we would say the film has kind of stacks up against the pluses that the movie makes. I think, overall, we need to chill on trying to present the facts in a right way. Yes, God does care about accuracy but He moves and acts, ‘In, to and through’ all of our attempts to tell a story. Because He doesn’t have perfect people running things. He has messed up, selfish, wicked people who think they have a grasp on what God is like. He uses these people to get as many human beings as possible as close to the light as possible. Therefore, Noah gets people thinking. It gets the discussion rolling.

Lastly, I would say, however, that the end of the film leaves you with this idea that man is pretty good and man will survive. Like most films that feature us broken humans that is the same sentiment that has attached itself to pretty much every film that it out there. Hunger Games, The Impossible, Cast Away, 2012, Day After Tomorrow, Independence Day..and the list goes on. Humans rule. Humans are the best. Humans can make it. Humans, given the right amount of plasticity around uniting together skills humans can do anything.

Noah ends with that sting. It ends with you feeling like you are not as depraved as the bible would say you are and God is not really as merciful as the Noah narrative really actually is. The fact that only 8 people survive shows us more of God’s goodness when no one was to be spared. We need both the goodness and the severity of the Lord. But still, it gets people thinking and I think it opens up a door for us to talk it out with everyday people. Don’t look for accuracy just look for anything that will lead people back to God. It really is that simple.

“Strength comes from the creator.” Noah says, “I didn’t want to see anyone ruined by this world.”

Noah says, “I’m asking you to be a man and do what needs to be done.”

“The creator destroys the world because we have wickedness.”:

Noah says, ” We have been entrusted with something greater than our own desires.”

And lastly, “The choice was put in your hand if we were worth saving he chose mercy, Emma says to Noah, (He) chose mercy help us do better help us start again!”