Again, in parenthesis, you can call this ‘favorites of the summer’ and possibly one of the best religious/spiritual film of all time. And if it so happens to be in the animated category then it really doesn’t matter what else can even come close because other than The Passion Of The Christ not many other Christian films come close. Like I had said in the LEGO movie review the animated genre has more going for it then you would even consider on the front end of things. 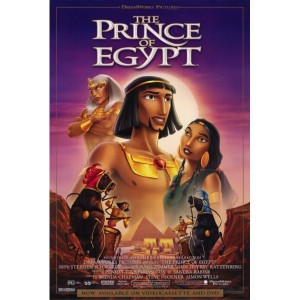 Plot: With this key phrase( in Hebrew the word is Yocheved) a woman says, ” My son, I have nothing I can give, but this chance that you may live.” And so most have heard the story of Moses but this is it. The Palace, the brotherhood and the rebellion. The audacity to confront the evil Pharoah and the same man that murdered a man out of his desire to see justice and to see peace be established to his own kind. Leading the people out of Egypt and with one very climatic scene of the dead sea splitting open this is one worthwhile musical/film.

Other points to be noted: I have heard the story of Exodus my whole life. Stemming from early five to six years old hearing it in Sunday school. And a decade ago( when I really started reading the bible for myself) I really got into the bible and embraced all the stories of Old and New. Most Christians skim over the Old Testament or avoid it altogether because we don’t like what we see when we see God. We don’t like the “Old Testament God” that we say is so divided and so cut off from “grace” and “mercy,” but seeing the way God cares for His people Israel is a more relevant piece of knowledge then perhaps just kitschy Christian films that seem to center more on “being positive” then in actual telling the truth and preaching the Gospel.

The deeper meaning: the story is simple and the characters are complex. That is often times the power of complexity. It is not in the actual storyline where subplots and subtext fuel the main things, rather the beauty lies in the complexity of the people. I am more convinced now more than any other time in my life in watching films that the characters and the humanity that they offer is what stays with me more and most certainly it is in this film’s case. God will have a people fully knit to His heart and to His will. It is a grave mistake for us to look at events happening in the Middle East and to simply gawk over some warped idea that all that remains and matters today is some pseudo Gentile mission that is devoid of Israel. Jesus will remain in the limitations of a man and still be fully God but has not and will not change the fact that He is a Jew and is Jewish and is returning to the city of the great king called Jerusalem. It is a serious error to eliminate Israel from any form of Second Coming theology and even from any belief and teaching that effects the way that we live today.

It is also true that people have misunderstood or overdone modern day Zionism and have become ‘to concerned’ with bringing salvation to the Jews because they are so hardened and missed the first coming, so lets try really hard to make them not miss it a second time. There is a need for balance and for both perspectives but seeing this film inspires that God is for His people Israel and will continued to use them as his battle ax and He will do us until He makes Jerusalem the place where He rules and reigns from and disciplines the nations from there.

“God will not abandon you, so don’t abandon us!”

This is must see for everyone and for sure anyone who claims to be a Christian.